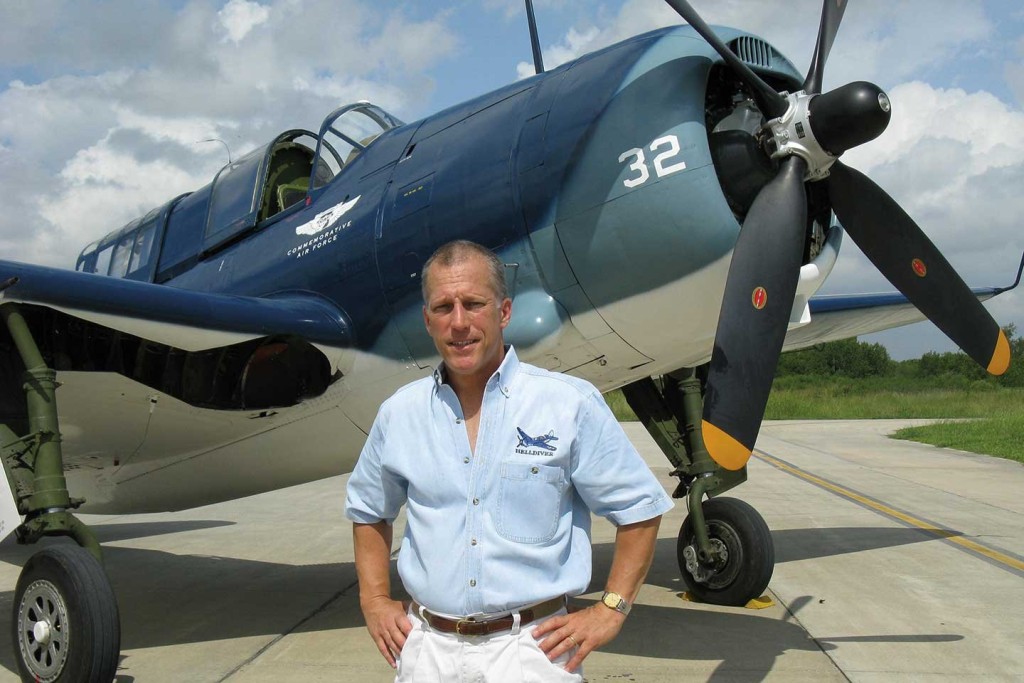 Of the five World War II Curtiss SB2-C Helldivers that still exist, only one is airworthy. Edward Vesely, SBA ’79, is one of only two pilots qualified to fly it.

Vesely, the senior director of sales for Welsch Aviation’s Houston office, is flying in air shows throughout the country, giving spectators the opportunity to see, hear, smell and touch a piece of history. While he calls it an honor, a privilege and a responsibility to fly the Helldiver, his background makes him uniquely suited for the task.

The son of a U.S Air Force mechanic, Vesely was 11 when his family moved from Ohio to Michigan, where his father took a job with the U.S Department of Defense assigned to the Warren Chrysler Tank Plant. Living one mile away from (then) Big Beaver Airport at 16 Mile and John R roads, Vesely would ride his bicycle to watch airplanes on the weekends. His “ramp rat” tenacity paid off when he stumbled upon a 1940 Piper J-3 Cub, abandoned and in disrepair, and set about restoring it back to flight in what he called the “ultimate father-son project.”

Now a resident of Texas, Vesely and his wife and fellow pilot, Carole, still fly the Cub for fun. “In addition, my wife and I use our Beech A-36 Bonanza for domestic travel and support for our corporate jet sales business,” he said. “When your vocation and avocation merge it can make for a satisfying and rewarding career and life.” That certainly seems the case for Vesely, who carved out a career in corporate aircraft sales with his bachelor of science in business management/economics and lifetime love of aviation.

Vesely started flying light WWII-type aircraft early in his flying career. He and his wife of 36 years met as flight instructors in Pontiac, Michigan, and moved to Houston in 1980, shortly after Vesely received his degree from Oakland University. From there, Mitsubishi Aircraft hired him as a sales/demonstration pilot, followed by the launch of his career as a jet broker for the sale and acquisition of corporate aircraft. During that period, he began volunteering with the Lone Star Flight Museum and its WWII flying collection. This led to the invitation to fly the Commemorative Air Force (CAF) West Texas Wing’s Helldiver in 2005.

A carrier-based bomber produced from 1943 to 1945 for the U.S. Navy, the Helldiver was not always loved by its crew. The “Big-Tailed Beast” was considered underpowered, more difficult to maneuver and, in the Battle of the Philippine Sea, 45 were lost because they ran out of fuel returning to their carriers. Yet 7,140 Helldivers were produced, and they were heralded for delivering bombs and depth charges with pinpoint accuracy. Helldiver squadrons contributed greatly toward winning the war in the Pacific.

Although he has flown many WWII-era warbirds, including the Grumman F6F Hellcat, Grumman TBM, P-51 Mustang, B-25 Mitchell and S2 Tracker, his favorite is the Helldiver.

“As far as the mechanical aspects of the airplane, it is a very enjoyable airplane to fly. Roll is very light, pitch is medium in pressure and the rudder is extremely heavy,” said Vesely, his direct voice ticking off the principal axes. “We don’t deploy dive brakes, as we have to respect the fact we are flying a one-of-a-kind airplane that is 70 years old.” The CAF does, however, allow opportunities for flight enthusiasts to take a historic flight in the Helldiver to experience the thrill of a lifetime facing backward in the gunner’s seat.

Vesely said that because of his Oakland University education, his satisfying career in corporate jet sales and extensive volunteer work, he has traveled to five continents and enjoyed associations with people at all levels of society.

“These experiences have helped me to recognize the importance of quality education which led me to such a vast array of opportunities,” he said.

Through his educational leadership as a board member of Southwest Schools, a local charter school in Houston, and involvement with the CAF in perpetuating living history, Vesely hopes to help the next generation understand the importance of education and the role that history serves. When young people can honor the lessons of “The Greatest Generation” and experience living history, perhaps they will better understand how to avoid errors of the past.

“History doesn’t come alive until you see it alive,” said Vesely. “That is why we fly these aircraft.”