The Pre-Purchase Inspection of Your Jet:
What to Look Out For

In private jet sales, the pre-purchase inspection is the critical time when the aircraft is scrutinized and reviewed for sale. It is the penultimate step before the aircraft is accepted and delivered to the buyer.

What Does It Involve?

The pre-purchase inspection has two main components: (1) the physical aircraft inspection and (2) the aircraft records inspection. All aircraft are not the same. The pedigree of an asset has intrinsic value. An aircraft without logbooks of sufficient detail is worth significantly less than the same aircraft with proper records. For instance, Bob Zuskin of Jet Perspectives in Herndon, Virginia believes that a Gulfstream G550, under 10 years old with no logbooks, would be worth approximately 50% of its normal value. If the aircraft was even older, the depreciation could be up to 95%, he added. In a standard transaction, the records inspected include logbooks, maintenance history, damage history, and relevant FAA forms. These FAA forms include 8110s, 8130s, and 337s; these encompass airworthiness to major alteration or repair. The value of the aircraft depends upon whether these forms exist in the records of the aircraft. Their absence can make the aircraft un-airworthy or worse, devalue the aircraft. A manufacturer-authorized inspection facility will check for complete documentation. It will also check that all Airworthiness Directives (ADs) and Service Bulletins have been adhered to. Typically, the seller assures that ADs and mandatory Service Bulletins with compliance dates on or before the day of closing will be satisfied. 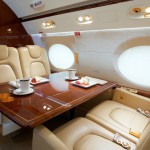 The scope of the physical inspection of the aircraft varies by make and model. It is tailored to the components and age of the aircraft. A manufacturer-authorized maintenance facility knows exactly what needs to be covered. Typical checks include the airframe, the engines/APU, the avionics suite, the systems, and an interior and exterior cosmetic review.

There are two avenues when choosing the inspection location: (1) an independent shop, (2) or a manufacturer-authorized service center. Holding the inspection at an authorized service center offers the honed expertise of personnel who deal with your aircraft make on a daily basis. Furthermore, fixing discrepancies covered under warranty, or otherwise, may be accomplished without having to move the aircraft. Independent shops, while less expensive, might not know the common historical problems of the aircraft in question and offer no warranty service. Additionally, the seller must be cautious with independent shops because those unfamiliar with a jet and its particular systems and nuances can be more prone to breaking items. In our view, manufacturer-authorized service centers with a proven track record are the way to go.

We heard of a situation where an independent shop was power washing the engines on a Global Express. Rather than mixing water with the cleaning detergent, the shop mixed water with adhesive. This ruined the engines. Two brand new engines and $14M later, the aircraft was ready to fly again! Another unfortunate time, a shop took the forward galley out of a jet that shifted the CG so far aft that the aircraft’s nose wheel raised into the air and the tail struck the ground.

Check back next week for insight on the acceptance, closing, and delivery of the aircraft.

Read about the LOI and Purchase Agreement here.